“I can’t believe I’m in California,” I said to Josh while we sat watching waves hit Jalama Beach.  We had just walked the twenty yards from the RV to the sand and were drinking our morning beverages there.  “I feel like I’m in somewhere in Baja.” 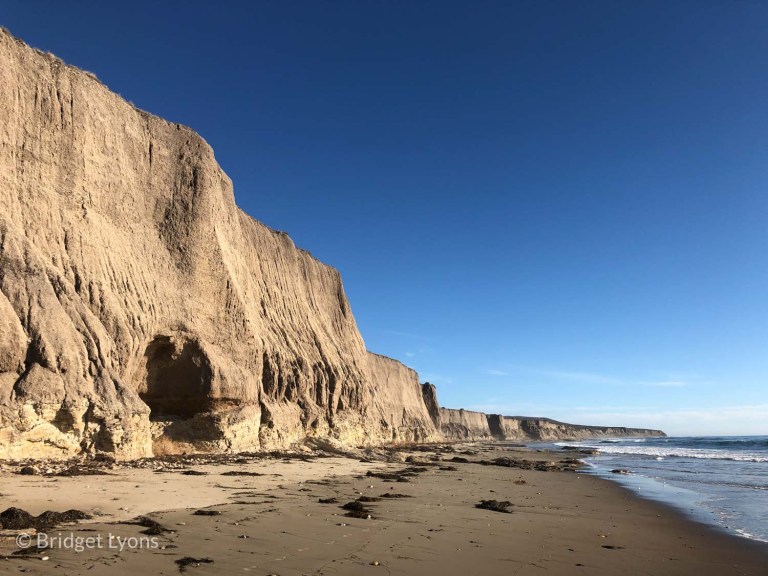 Most of my experiences camping next to the ocean have occurred in other countries.  The California coast is crowded, and, while there are myriad beaches in this most populous state, most of them are surrounded by houses, malls, and roads.  That’s why I wondered if I’d been transported to Mexico as I sat surrounded by an almost entirely undeveloped landscape. 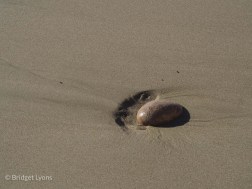 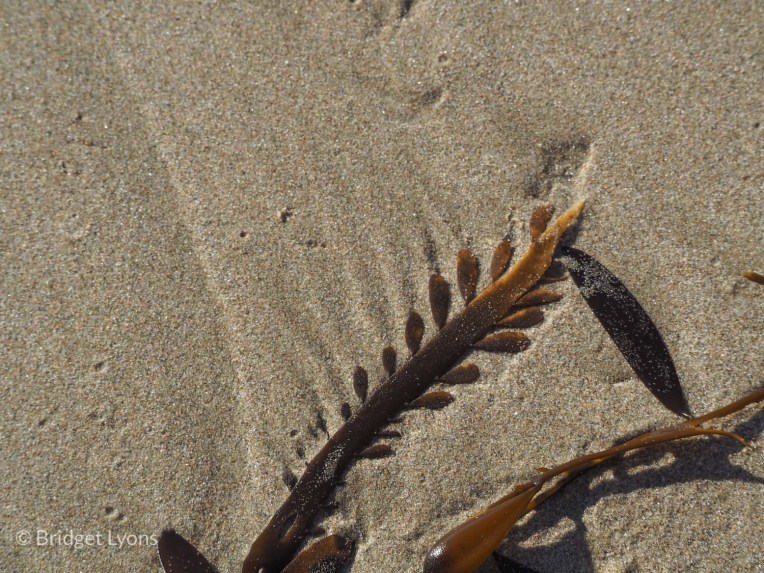 I say “almost entirely undeveloped” because Jalama Beach has two very apparent human-created features. One is the campground we stayed in—a $30/night outpost run by the county of Santa Barbara.  The other is the infrastructural remains of offshore oil drilling, a beast of an undertaking run by a variety of corporations over the last few decades, including Chevron, Exxon Mobil, and Venoco.

Until a couple of weeks ago, I’d never heard of Jalama Beach.  A man we met while surfing in Morro Bay had told us it was his favorite place on earth.  “And there’s a swell coming in that should be perfect for that break,” he added.  We filed that away in our brains, but we didn’t necessarily think much of it until the name came up in conversation two more times—in two totally different social contexts. 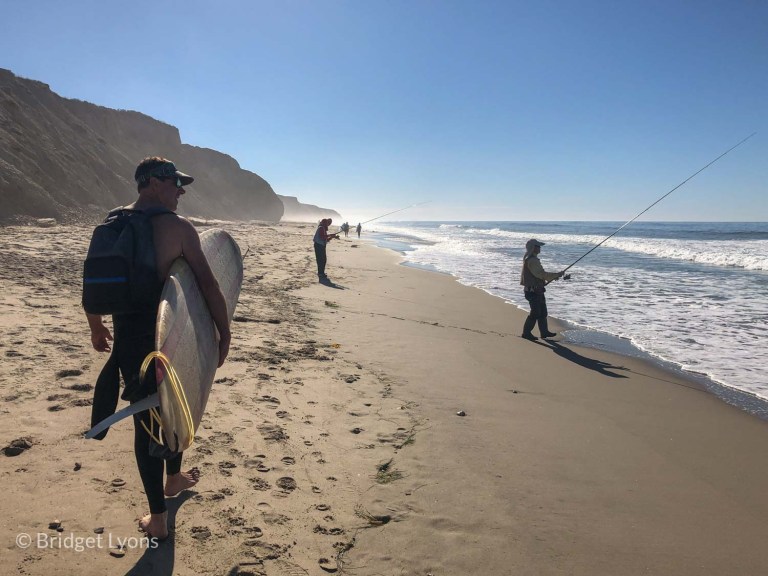 Originally, after spending the weekend in Santa Barbara, we’d been thinking of heading to the southern Sierras to mountain bike. But, warm, fog-free southern California had been treating us well, and the prospect of more surfing in a spot with few people was incredibly enticing.  We turned off the 101 towards this relatively remote section of the coast.

Jalama Beach lies about forty-five minutes from Lompoc, CA and about an hour north of Santa Barbara. It’s nearly surrounded by Vandenberg Air Force Base property, much of which is undeveloped.  The twenty-four acres of campground land was bequeathed to the county in 1943 by the Atlantic Richfield Oil Company, also known as ARCO (now a part of the pertroleum giant, BP).

The campground is not small.  With 117 camp spots, including 31 with sewer and electrical hookups for RV’s, this place must be like a small city when it’s full. And, according to all reports, it’s full almost every weekend of the year.

Luckily, we pulled in on a Sunday night and stayed until midday on a Tuesday, so we got to see the place in its more deserted state. 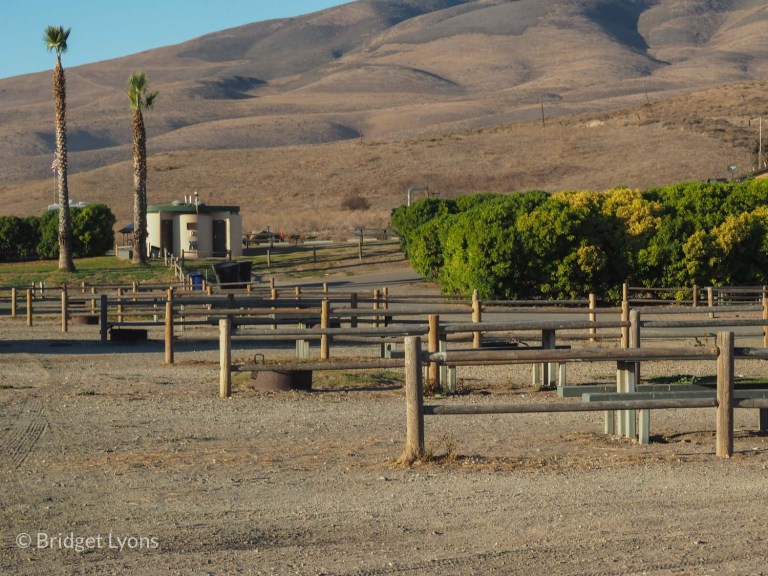 In addition to the camping spots, there are cabins for rent, shower buildings, an elaborate play structure, and a store which not only sells marshmallows, baseball hats,  and fishing tackle, it also has a grill that slings breakfast burritos and allegedly famous hamburgers.  “I suspect what makes their hamburgers famous is just the fact that they serve them at all,” Josh said. 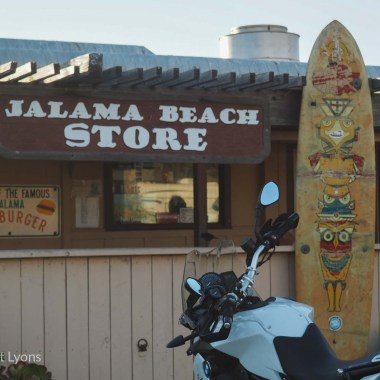 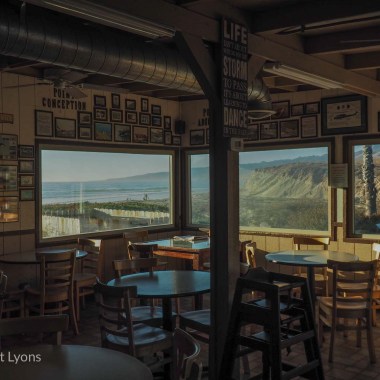 No doubt the grill makes a killing off of the recreationalists that show up to take advantage of what Jalama Beach has to offer—good surfing, kitesurfing, and fishing.  Most of the day users were wearing wetsuits and carrying boards, but, for whatever reason, it seemed like overnight campers were there to reel in the big one.

The surfers walked south to spots where there were interruptions in the pounding beach break that made for better peeling waves. The fisherpeople stayed near the campground, planting their huge surfcasting rods into the sand and watching for signs of nibbling perch, rockfish, or ling cod. 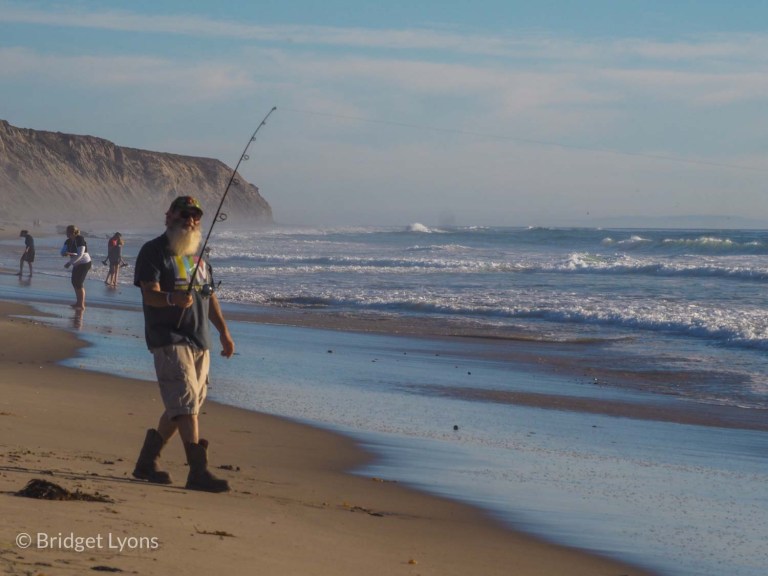 Even though the eleven-mile road to Jalama Beach ends in a mass of buildings and parked vehicles, the location feels fairly remote.  The cliffs that line the beach give the place a sense of starkness, as does the fact that you can see sand and surf for miles.  The sound of waves beating the shore predominates, along with the screeches of gulls and the whistling of the near-constant wind. 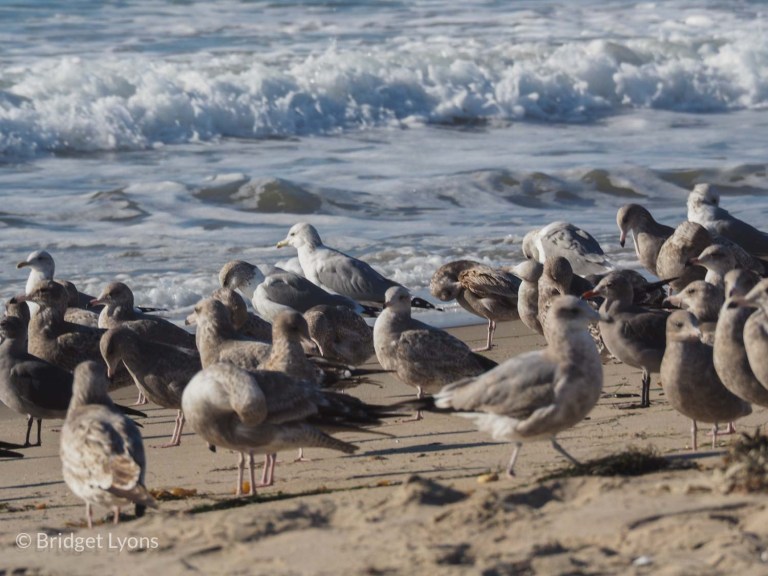 I ran on the beach for as long as I could—first downshore, then up—and my run lasted for an hour and a half before a lack of solid sand stopped my progress.  Along the way, I saw egrets, sanderlings, curlews, plovers, a vulture picking at the innards of a dead baby seal, and the remnants of a shipwreck. 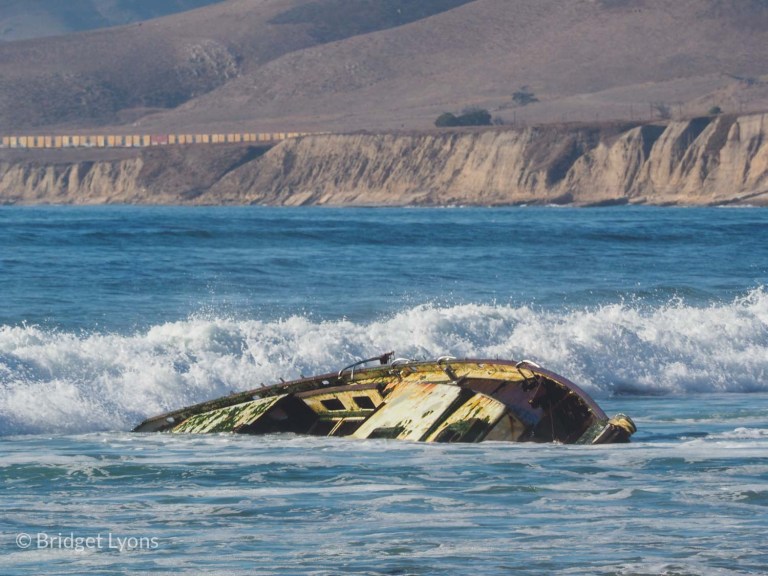 I also saw tar.  First, I saw it on a few rocks. Then I saw it solidified around a pile of kelp.  Then I saw it on the sand, congealed into a black mass with unnaturally smooth edges.  In case I’d forgotten about Jalama’s other human-made feature, here’s was tangible evidence of its presence. 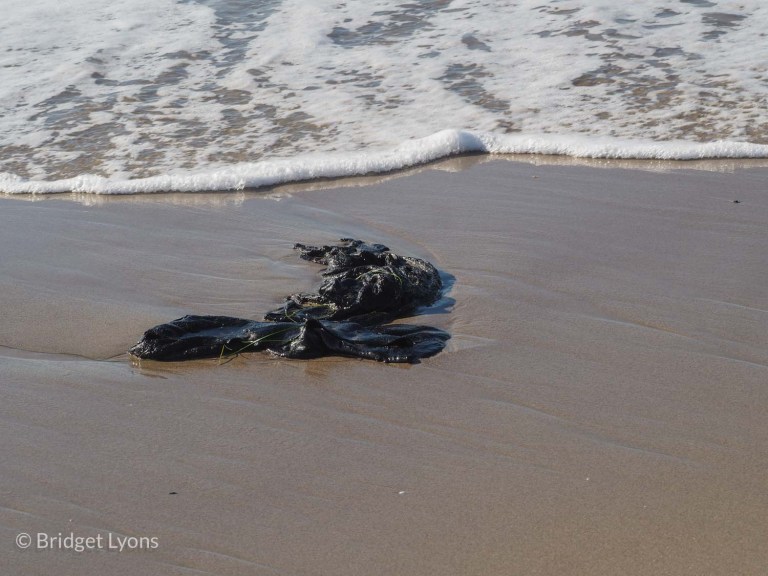 For the two nights prior to staying in Jalama, Josh and I had slept in the mountains above Santa Barbara. Our site had an amazing view of the city lights, their glow rimmed by the darkness of the ocean.  That sea of black was interrupted, however, by electrified towers that reminded me of the Imperial Walkers from Star Wars—offshore oil wells.  They were ominous reminders of the potential risk they pose to the ocean at all times, as well as of our dependence on this product.  And, the irony of lying in a comfy bed in the sleeping nook of an RV—the gas-powered vehicle allowing me to explore and appreciate these sites—did not escape me.

The drilling platforms are not just of the coast of Santa Barbara, they are off the coast of Jalama Beach, too.  Three loom over the horizon there, visible as grayish specters during daylight hours, and pinkish-orange electrical assemblages at night.  The platforms’ names are Hermosa, Hidalgo, and Harvest, and they and their roughly 30 wells apiece have all been decommissioned, as have the majority of other drilling platforms in the vicinity.  Although their lifespans have expired, Platform Harvest alone produced 74 million tons of oil and 50 trillion cubic feet of natural gas during it run.

The state of California has not allowed new offshore leases since 1969, when an enormous spill plagued the Santa Barbara County coastline. But, since marine water is a patchwork quilt of federal, state, and municipal jurisdictions, new leases have been issued in other areas.  Existing leases have continued to be exploited, and the revolving door of political power has resulted in executive orders both banning and allowing drilling in California waters.

There’s no way of knowing which platform was responsible for the tar masses I encountered on the beach.  Nor was I able to tell if the oil I stepped in was a remnant of the ’69 disaster, seepage from one of the remaining active wells, or a byproduct of the gradual shutdown of the decommissioned platforms in front of me.  I just knew it made me shudder.  ARCO had given the land I was enjoying to the county.  I accessed it using a vehicle that gets 10mpg. No wonder I had smudges of tar on the soles of my feet for days after leaving; I’m as implicated as anyone.

People come to Jalama Beach to check out of their daily lives.  The campground has no cell phone coverage, so no one was staring at devices.  Instead, they (and we) were hanging out—talking, napping, staring, surfing, walking, reading, playing music, cooking—in short, forgetting about the crises of the “real world.”  This was a pleasure to participate in, and a total joy to behold. 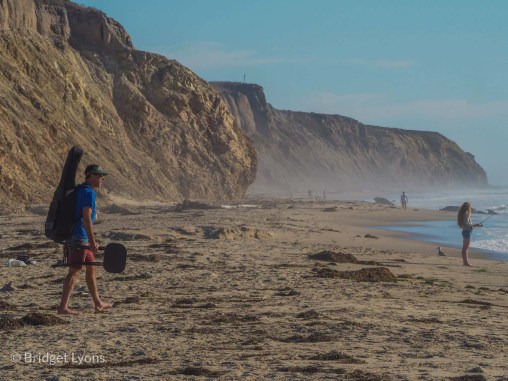 And still, a representation of one of our most pressing crises was looming right offshore. It had deposited its detritus at our feet, where it begged not to be ignored. 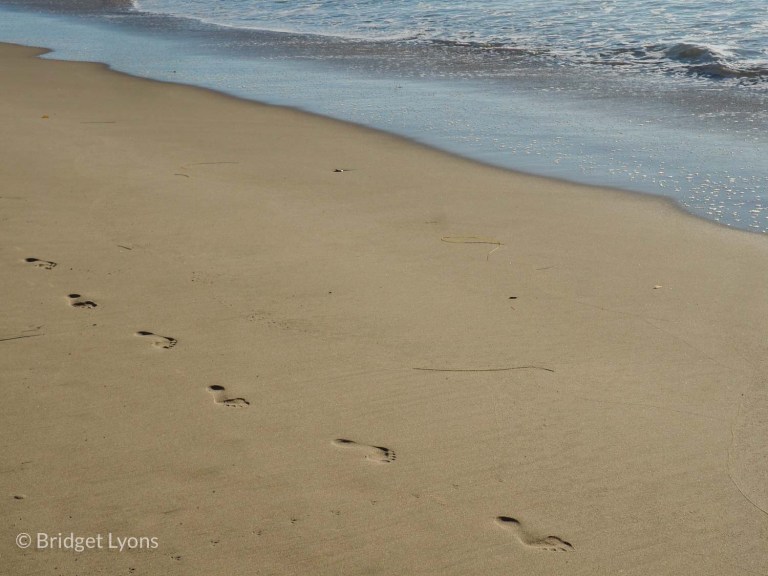 I'm just another soul who's been embodied for a bunch of trips around the sun. I'm trying like mad to enjoy the ride while also making some sense of what we're all doing here. Exploring + hoping for perspective = exploraspective - my way of processing my adventures into something to share with others. Somewhere along the line I've visited 40+ countries, every state in the US, who knows how many National Parks, and a heck of a lot of public art displays, galleries, and museums. I try to see live music everywhere I go, ride my mountain bike or swim in the 'hood, eat food that makes me stop and smile, and do at least one thing that embarrasses me. In addition to writing and taking photos for this blog, I also own Spiralglyph Media (www.spiralglyphmedia.com), a communications firm dedicated to creating timeless verbal and visual expressions through web and print design. My travels help inspire my work - and vice versa. If you'd like to read more of my writing, you can find some at bridgetalyons.com. If you'd like to subscribe to this blog, click on the three little lines in the upper right hand corner and you'll be prompted to enter your email address. Enjoy. Keep in touch. May the force be with you, always. View all posts by bridgetannlyons